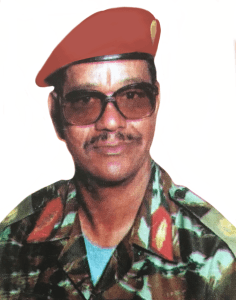 Brigadier General Tesfaye Habtemariam is one of Ethiopia’s greatest military leaders. General Habtemariam’s career spanned three decades and survived three different Ethiopian governments. From 1964 to 1991, he commanded troops on the battlefield in nearly every engagement in which the Ethiopian military saw action.

Drawing on his wartime journals, notes, letters and memories, Habtemariam discusses his childhood and military career. From working with Israeli commandos to form a new “Special Forces” unit to establishing the Anti-hijacking Office.  From training several Ethiopian Airborne Battalions to commanding several large units, Habtemariam served his country as only a true patriot would.

This fascinating memoir details military actions on the battlefield as well as covert operations behind enemy lines and includes detailed diagrams, battle plans, and photographs. General Habtemariam shares details of the heroic escape in which he and his few remaining men, half-starved and out of ammunition, prepared to fight to the death. Charging the enemy position with fixed bayonets, they discover it suddenly abandoned. The enemy just pulled out! Now, instead of dying in battle, they find themselves struggling to cross a dangerous desert wasteland to rejoin their forces … hopefully living to fight another day.

Tesfaye Habtemariam took part in eight major battles. He later commanded a battalion in the Special Forces, the 18th Mountaineer Division, and the Airborne Training School.  Finally, he became the Army Commander of the Tewodros Force. Brigadier General Tesfaye Habtemariam received the “Hero of Ethiopia” medal from a grateful nation after thirty years of selfless sacrifice and service to his country.

If you enjoy military history, this is one book you will definitely want in your collection.